All animals are constantly confronted with multiple behavioural options that they need to choose from depending on the context and on their internal state. We study how a group of neural cells interacts to ensures that appropriate behaviours are chosen and correctly ordered in an ever-changing environment using a powerful system with a compact and tractable nervous system: the fruitfly larva. We combine multiple approaches from detailed behavioral and connectivity analysis to in vivo imaging of neuronal activity. 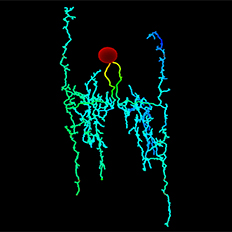 Making appropriate behavioral choices depending on the environment and one’s internal state is essential for survival. In addition, a key feature of behavior is that it is frequently organized in sequences of actions. The neural bases of the decision-making process that leads to appropriate behavioral choices and of the sequence generation mechanism that ensure the proper ordering of individual elements in an action sequence are poorly understood at a circuit and single neuron level.

In our research, we exploit the advantages of the exquisite genetic tools available in Drosophila for manipulation and monitoring of neuronal activity at single neuron level and the numerical simplicity of the larval nervous system that allows the reconstruction of synaptic connectivity across the nervous system using large-scale electron microscopy to study the structure and function of the neural circuits for sensorimotor decisions and action sequences. We focus on three main aims : 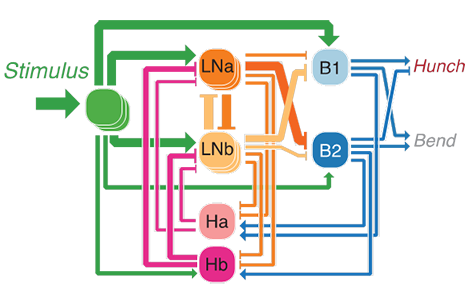 Circuit underlying the selection between a hunch and a bend. Schematic representation of the circuit based on EM reconstruction data.
The width of the line is proportional to synaptic strength. (Jovanic, Scheinder-Mizell and al., cell, 2016).

If you are interested in our research, you are welcome to contact us by email.
We are interested in applications from motivated graduate students and postdocs. We will also consider internship requests of undergraduates, both in the field of biology, engineering and computational methods for data analysis. 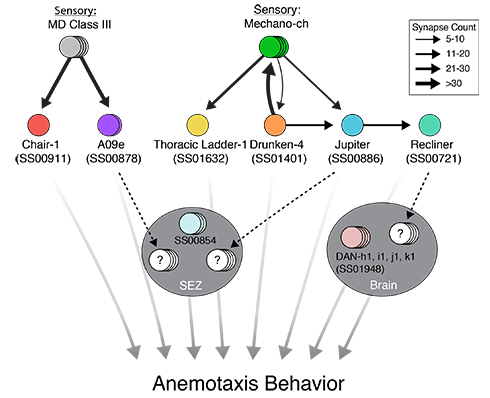 Making appropriate behavioral choices depending on the environment and one’s internal state is essential for survival. Nevertheless, the neural bases of the decision-making process that leads to appropriate behavioral choices is poorly understood at a circuit, single neuron and genetic level. No matter how simple or complex the decision, depending on the animal’s behavioral repertoire and the complexity of the world that it interacts with, the mapping between sensation and behavior must be flexible, so that the multisensory context, animal’s state and experience can all modulate decisions. However, different factors could bias the system towards different behaviors simultaneously. Yet, many actions are physically mutually exclusive. Thus, circuit mechanisms must exist in the nervous system that can promote one behavior based on even a slightest net bias and fully suppress others (winner-take-all computation).

Key questions in the study of behavioral choice are :
1) how do sensory information about the environment and the internal state of the animal bias behavioral choice and
2) how are competitive interactions implemented that enable one behavior to be chosen based on even a small net bias ?
Another key feature of behavior is that it is frequently organized in sequences of actions. To generate action sequences the nervous system needs to regulate transitions from one action to the next and at the same time prevent reversals from later actions back to earlier ones to ensure orderly progression within a sequence.

It has been difficult to determine the circuits that would implement competitive interactions and sequence transitions with cellular and synaptic resolution.

Drosophila larva –model system studying for neural circuit structure and function
We study the circuit implementation of sensorimotor decisions and action sequences in the tractable model system, the Drosophila larva. The Drosophila larva has a rich behavioral repertoire and can generate many different mutually exclusive actions in a probabilistic way. It can also generate many types of probabilistic sequences of action. In addition, it has many advantages as a model organism for uncovering the circuit implementation of neuronal computations. Due to the compact size of its nervous system (ca. 15,000 neurons) a volume of electron microscopy images spanning the entire nervous system could be generated and circuits can now be mapped with synaptic resolution. It has uniquely identifiable spiking neurons amenable to electrophysiological recordings or optical imaging of neural activity to map functional connections between neurons and establish correlations between activity in specific circuit elements and behavioral choice and sequence transitions. Finally, exquisite genetic tools enable selective manipulation of specific neurons to establish causal relationships between specific circuit motifs and their function.
In our research, we combine these methodologies to study the neural circuit mechanisms underlying sensorimotor decisions and action sequences. Our research is organized around three main aims :

• Aim 1. Determine how contextual information modulates behavioral choices. We have previously identified two populations of reciprocally connected inhibitory interneurons that implement the choice between two mutually exclusive actions in response to a single sensory cue (Jovanic et al. Cell, 2016). In many situations in reality, the decisions are made based on multiple sensory cues in the environment that the animal is exposed to and the external context biases the behavioral choice. In addition, animals’ internal and behavioral state also influence decisions. We are using a combination of behavioral, electron microscopy reconstruction and functional imaging studies to determine what type of contextual information biases the choice in response the mechanosensory cues, map the pathways for contextual modulation and determine the mechanisms involved.

• Aim 2. Define the brain-wide mechanism underlying competitive interactions between multiple actions In response to an air-current larvae can perform one of five types of escape behaviors : Hunch, Bend, Stop, Back-up and Crawl or probabilistic sequences of these that can be detected using automated algorithms. How is the competition between multiple actions implemented in the nervous system ? What are the circuit motifs involved and where are the sites of these competitions located in the nervous system ? To address these question, we investigate the functional relationships between neurons that trigger the same action (do they activate each other ?) and between neurons that drive distinct actions (do they inhibit each other ?) using optogenetics and calcium imaging of neural activity. We further use electron microscopy reconstruction to map the detailed neuronal architecture that underlies the selection of behaviors. We model observed network architectures and then test the predictions of the models by manipulating specific circuit motifs during sensorimotor decisions. The project will reveal the number of sites of competitive interactions (for each pair of actions and for all the actions) and to what extent this decision-making process is a distributed computation across the nervous system.

• Aim 3. Determine the circuit mechanism underlying the production of longer innate sequences. We have previously shown that lateral disinhibition and feedback disinhibition implement a probabilistic sequence of two responses to a mechanical stimulus : lateral disinhibition promotes transitions from hunch to bend and feedback disinihibition prevents reversal from bend to hunch (Jovanic et al, Cell, 2016). Whether this is a general mechanism for longer sequences is unknown. We hypothesize that a chain of such circuit motifs could implements longer sequences. To identify the circuit motifs that implement the probabilistic sequence that Drosophila larvae do in response to an air-puff in and test the above hypothesis, we investigate the structural and functional connections between the neurons that control transitions between individual actions using electron microscopy reconstruction, functional connectivity studies, modeling and manipulating circuit elements in freely behaving animals.