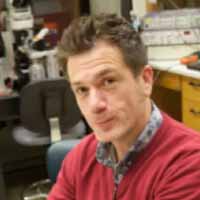 Fish swim, quadrupeds like rodents walk on their 4 limbs and bipeds like primates have more complex motor behaviors to swing, climb and grasp. Although these behaviors are different and require specific skills, at the neuronal level, they ultimately rely on spinal circuits sharing similar features to generate motor activity. To insure precise and coordinated locomotor activity, the system also depends on sensory feedback systems to adjust and adapt motor output to the environment. Interestingly, in all vertebrate, neurons in contact with the cerebrospinal fluid (CSF-cNs) have been observed around the spinal cord central canal. They are strategically positioned between CSF and parenchyma to detect and integrate signals and in turn modulate neuronal activity. In recent years, there has been a renewed interest for this neuronal population and data now suggest they represent a novel sensory system capable of modulating spinal motor activity and motor behavior. Although, in zebrafish larvae, the role of CSF-cNs as modulators of motor activity is well established, this function had not been reported in mammals until recently. Using a combination of viral tracing strategies, histology, genetical ablation approaches and electrophysiological recordings, we demonstrate that CSF-cNs are interconnected to form an ascending networked and appear functionally inserted in the motor spinal network. Moreover, in contrast to the results obtained in fish, their genetical ablation does not perturb locomotion per se, but leads to disrupted control of postural motor activity. These results, therefore indicate that in mammals, CSF-cNs also possess interoceptive sensory functions to accommodate the biomechanical requirements of limb-based locomotion. The future challenge would be to precisely dissect the neuronal circuits and identify the physiological signals underlying this function.