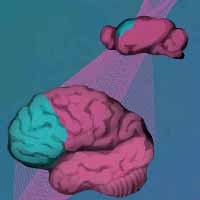 Anatomy and function of the prefrontal cortex across species.

Understanding the human brain relies for a large part on work in animal models, which necessitates a careful cross-species comparison. The prefrontal cortex (PFC) is particularly relevant in this regard as its function is poorly understood and potential cross-species differences remain highly debated. This workshop brings together experimental and computational scientists whose work allows a comparison of the anatomy and function of the PFC between species (in particular between humans, monkeys and mice).

EBRAINS is uniquely suited to provide a platform to compare anatomy, physiology and behaviour between species, due to its atlases, numerous datasets, as well as the whole brain models from different species. The interactive format of the workshop will allow speakers as well as participants from largely separated fields to interact and discuss, which is expected to create novel insights as well as lead to more coherence and clarity in the relevant terminology, formats and important research directions in the field.